Being Belgian: Death of a Nation, or surrealism applied to politics

As a joke, I have been telling people for years that Belgium was unlikely to reach a ripe old age, as an accident of history derided by its own inhabitants.  That type of talk being, by the way, Belgian; not Flemish or Walloon, but Belgian.  Recently the joke has turned sour, the breakup noises have reached fever pitch, as in these articles from the NY Times or the Washington Post and probably at its most eloquent in the recent Economist leader calling for the dissolution of Belgium (but who wrote this for the Economist anyway ?  Bouckaert ? Dillen ?).

Everyone is very focused on financial data (the Flemish are richer, the debt is uneven, leading to what NewsWeek rightly calls a pure cost/benefit analysis) or political mechanics (no government having yet been agreed upon, with months of delay); there is a lot of accounting going on to demonstrate the validity of a split for the richer and more efficient Flanders.  A teacher and former journalist, tired with a debate reduced to figures, put the country for sale on eBay and got $13M for it.  Not bad given the amount of debt.  My favourite misguided headline talked of “simmering ethnic tensions” (these tensions being  between white Catholics in the North and … white catholics in the South). 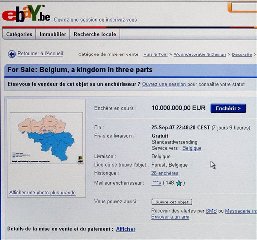 But not many people pay much attention to what it means to be Belgian.  Sure, you can look back at history and call it an accident, a number of communities pressed together into an empty national shell by powerful neighbours.  But for me and many people I know, Belgitude (“being Belgian”) was always important in determining our relationship to the world, in a way belonging to the regions will never do.  Absurd humour, self deprecation, surreal painting, Jean-Claude Van Damme of course, and the world’s best beer.  What some people confuse with mediocrity is actually a kind of quiet self confidence hidden behind a refusal to pretend to be more than what we are (unlike our Southern neighbours in Paris).

So far so Belgian.  Fake documentaires on RTBF, eBay for sale bid, all appropriately absurd.  The main reason why Belgians are generally likeable (methinks) is because we have an ingrained sense of our own insignificance.  We cannot really take ourselves too seriously.

But now add to the mix the following: the right-wing harcore separatists of Vlaams Blok (sorry Belang) and affiliated Flemish unsavouries on the one hand and the corrupt and inefficient Socialist Party Walloons on the other .  Bake in an obsessive battle for ownership of Brussels which started many decades ago, and hey presto, you have a powerful recipe for good populist politics with its assorted fingerpointing and recriminations.  15 years ago no one cared, but now there are growing calls from the street to make this split a reality.  The separatists are starting to win the debate. 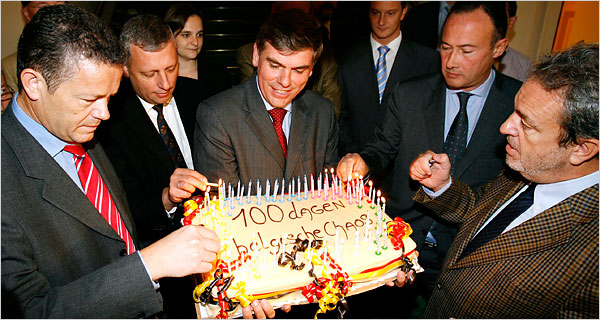 <— A photo of Filip de Winter, separatist in chief, celebrating a 100 days without government (100 dagen Belgische chaos). Nice.  If you want a flavour of the racist nationalist, supermatist, (Rexist ?) and supposedly Atlanticist views of some of the Flemish thinkers go read the Brussels Journal.  Don’t forget the many, many pinches of salt.  Vlams Belang’s 2006 motto, to give you a flavour: “Secure, Flemish, Livable”

Having said that, it’s easy to have sympathy for the Flemish crowd.  They speak (or spoke) the French language well, dominate the business landscape and have enjoyed strong growth in the past two decades.  By contrast the once dominant Walloons are stuck with a Socialist Party that has been in power for decades and a population that suffers high unemployment and is dependent on the state for its survival.  The mines closure left the region reeling from the shock and it is not even close to recovering.  In many ways, I don’t think the Walloons and Flemish really ever got along that well, or that they have too much in common.

Which leaves Brussels:  predominantly French speaking, technically in Flanders, tactically targeted by the Flemish separatists as the seat of most Flemish insitutitions, and the capital.  Brussels holds the key, but no one has a solution.  Two thoughts:

A/ Brussels has a funding problem that is almost impossible to solve:

B/ Brussels is not Flemish.  But neither is it Walloon.  My grandma spoke Bruxellois, a mixed bag of both.  The town was created by the French Kings and then awarded to the Dukes of Leuven (in Flanders, but related to the House of Valois).  So God knows !  But it’s certainly not Flemish only, with a vast majority of French speakers (70-80%) and a unique soul.  Maybe Belgitude is really Bruxellitude.

<— Everything in two languages

Flanders has created a stalemate in isolating Brussels is almost impossible to solve.  That was probably the objective.  Separatism in Belgium is a complete absurdity without a proper solution to the Brussels issue, and a terrible example to the rest of Europe.  I can see the temptation of being the “new Denmark” for Flanders; but that will never happen in the current spirit of exclusion and nationalism.  I am hoping that we can move to a proper federal model on the Swiss mould; after all, we are probably the only country that I know of that is effectively splitting without the loss a single hu man life.

Whatever happens, and joking aside, the Belgian crisis cannot be separated from the broader topic of European identity.  That is why it’s absurd, surreal, and oddly, important.  Belgium, the land of cartoon, Beers and waffles, may hold an important key to the future of regions in Europe.  Personally, I would rather see a Europe that glorifies differences rather than a mosaic of region all aiming for ethnic or culture purity.

If you have a video of the 86 semi-final, know why men drink Jup, rode cuistax eating waffels, have done the 24 heures velo, once had a Walibi sticker on your car, thought Maurane was cool, know what Duvel, Brigand, Maes, Rochefort and Ciney have in common, eat fries 7 times a week with Andalouse and think comics are the 7th art form, you will know who is on the following Brussels building:

7 Responses to Being Belgian: Death of a Nation, or surrealism applied to politics